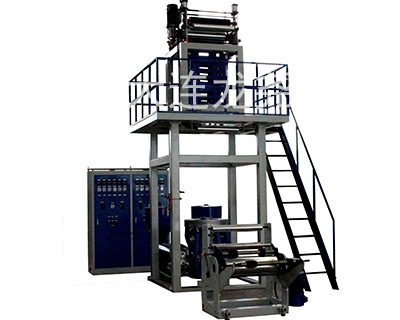 2. This series of units adopt the upper traction rotation system, which completely eliminates the phenomenon of large and small ends of film rolls, and is more conducive to high-speed composite and multi-color overprint;

3. This series of units adopt full-automatic winding system to automatically change the roll and cut the film, which is more intelligent, time-saving and labor-saving;

4. This series of units adopt the cooling system in the film bubble, which greatly improves the film output (about 15%) and the transparency of the film;

ABA film blowing machine uses two film blowing machines and a three-layer coextrusion die to blow plastic film. The surface layer and bottom layer share one extruder, which we call a. the other extruder extrudes the middle layer of the film, which we call B. in this way, the blown film forms a, B and a three-layer coextrusion film.